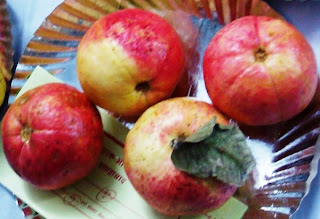 The other day “The Hindu” brought out a feature on the guavas of Allahabad. Allahabad has, seemingly, always been famous for guavas. Since childhood we used to hear hawkers carrying basketfuls of guavas on their heads calling out “Ilahabad ke amrud” (guavas of Allahabad). We did not know whether they used to be really from that blessed place. More than sixty years ago it seems rather farfetched that guavas of Allahabad would travel all the way to Gwalior in Central India where I was growing up the early 1940s and 1950s. But, then the hawkers had their own way of attaching, what has since come to be known as, Geographical Indication of the products that they hawked. Thus, we had “Hoshangabad ke tarmooz” (Water melons from Hoshangabad), “Nagpur ke Santre”, (oranges from Nagpur), “Malihabad ke dussehri” (dussehri mangoes from Malihabad), “Bambai ke hapus” (Alphonso mangoes from Bombay), “Chaman ke angoor” (grapes from Chaman, Afghanistan), and so on. Over the years, this district-wise specialisation in production of fruits seems to have been wiped out with the economic, scientific and agricultural, especially fruiticultural progress that the country has made. Everything virtually is being grown everywhere and numerous places have, as a consequence, lost the tags they earlier had attached to them for production of some specific fruits.

Guavas of Allahabad, however, are different. They stand out even today and, to my knowledge, their production has not been replicated anywhere else. It is indeed unique, like of which I had never seen before. One would normally think that guavas of every place are more or less the same. It is not so; the difference is to be seen to be believed. I could not believe my eyes the first time I set my eyes on them in the main square of Allahabad. A couple of hawkers were hawking them piled up on their baskets. They looked like apples from Himachal or Kashmir – red, either all over or interspersed with yellows, and were well-rounded – a beautiful looking fruit. Inside it has pink meat and as one bites into it one gets a very pleasant fragrance. Red, apple-like guavas are grown in some countries but, I dare say, the ones of Allahabad are unique as far s this country is concerned.

Of course, there are various varieties that orchards around Allahabad produce but the red one is what beats them all. Known as “Surkha”, meaning red, it gets better as the winter chill increases. Now that the cold weather has set in, the fruit, apparently, is available in plenty. I saw videos of Kumbh Mela where Westerners were found biting into the delectable fruit sitting on the sands near the Sangam, the confluence of Ganges, Yamuna and the extinct river Saraswati.  Having a very short shelf-life, it is generally not amenable to transportation over long distances. During our visit a few years ago, we did not find it in Varanasi which is a hundred-odd kilometres from Allahabad. At Lucknow it was just not there, presumably, being a little too far out for its comfort.

Allahabad has more to it than just “Surkha” and Kumbh at “Sangam”. It has Khusro Bagh, a 17th Century walled garden, in which are located the mausoleums displaying exquisite architecture of Emperor Jehangir’s son Khusru, his sister Nithar and their mother, Emperor Jehangir’s first wife who was a Hindu. It also has a 16th Century fort built by Emperor Akbar. The University of Allahabad, once known as the Oxford of the East, is located here. Anand Bhawan, the house built by Motilal Nehru is another attraction having been an important scene of action during the country’s freedom struggle. Allahabad also offers in its bustling Chowk some delicious spicy eastern Uttar Pradesh cuisine.

_____
Photo of red guavas is from Internet. Those of Khuro Bagh and Anand Bhawan were taken by me